In a conversation between @Mechanical_Mind, @Burgaz and myself on Twitter Wednesday evening, @Mechanical_Mind was asking what I will do about Twitter when the World Cup is on as he knows I detest football, my answer was easy, global filtering on TweetDeck will come to my rescue.

‘but what about when you are on the Nexus??’ he asked, again I replied TweetDeck,

this lead to some quick thinking by myself, I had read here that it was coming shortly so I bluffed saying I had it on my Nexus One…..

Then @Mechanical_Mind wanted proof so I posted this image to satisfy him….. 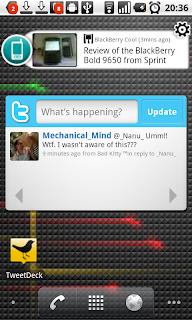 But to simply show the home screen icon wasn’t enough to satisfy @Burgaz‘s needs, ( he is Welsh after all..) he asked for proof of the app running with his post shown within……

So a few minutes later I came up with the following image using photoshop and a screenshot from the iPhone running TweetDeck….. 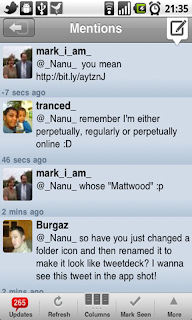 This satisfied everybody immediately that I was running TweetDeck on my Nexus One….. 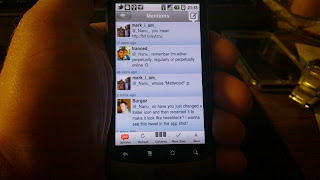 BUT….. Unbeknownst to myself, the images had been spotted by a French Blogger and the above images are doing the rounds in France, Spain, Germany and Italy! sorry guys!